For 8 years, the number of dogs in the world has almost doubled! Most of them are wild. How does this affect dogs bite statistics?

Find out which dogs are the most aggressive and how dogs are most often attacked.

900 million dogs in the world
50% of children will be bitten by a dog during childhood
4.7 million dog bites in the US annually
Males are more likely to get bites than females
60,000 people worldwide die from rabies caused by dog ​​bites
American Pit Bull Terrier named the most dangerous dog in the world

Between 75% and 85% of these dogs are free-range, which means they are stray or feral and have no owners or homes. China and the United States have the highest dog populations at around 110 million and 89 million, respectively. Most of the dogs involved in the attack are family dogs, but some are wild or stray.

These numbers include pets and stray animals:

You probably don’t want to worry about spending thousands of dollars on sickness, welfare, and medical bills that you may encounter over the course of your pet’s life. Check out the health care sharing plan that reimburses you.

It is difficult to track dog bite victims and dog attack statistics, according to the World Health Organization. On the other hand, it is easier to register hospitalizations and deaths from dog bites (animal bites). According to their rough estimates, tens of millions of bites occur every year. Many dog ​​bites and bites occur in low- and middle-income countries. At the same time, travelers are often bitten when visiting these countries.

In a 2018 study in China, thousands of dog bite victims die each year from rabies caused by dog ​​bites. Worldwide W.H.O. states that about 60,000 people die each year from rabies as a result of dog bites. However, in countries like the United States, where vaccines are widely available, the number of deaths from dog bites due to rabies is much lower. In 2019, there were only 48 fatal dog attacks in the United States. There are only 1 to 3 rabies deaths reported in the US, but they are caused by bats, not dogs (CDC, Center for Disease Control).

Develop your dog’s hidden intelligence to eliminate bad behavior and create the obedient, well-mannered pet of your dreams with the help of a professional CPDT-KA certified dog trainer. Check out the dog training system that took 10 years to perfect.

Vulnerable groups in the US and UK.

These statistics are repeated in studies in other countries. For example, according to a study in the United Kingdom, dogs have bitten nearly half of all babies at one point, and males are more likely to be bitten than females. Children are also more likely to be seriously injured, as many of the reported dog bite injuries are in the face and neck.

While the other half of dog bites occur in adults, the elderly are the second largest age group with the highest number of dog bites. Adult males are 81% more likely to be bitten by dogs than females.

Personality can also play a role in who the dogs bite. According to a study from the United Kingdom, people who are anxious, nervous or scared are 22% more likely to be bitten by dogs. The body language of these people plays an important role in the attack of dogs. Nervous behavior can make dogs feel insecure and defensive, causing them to attack.

In the United States, dog bite statistics show that postal workers are most commonly bites. In 2019, the US Postal Service reported that 5,803 employees were attacked by dogs. Many dogs are territorial and protect their homes and their owners.

have a high number of bites.

Dog bite statistics in the United States by state

In addition, only about 800,000 of these bites are serious enough to warrant medical attention. In addition, in 2019, only 17,802 bites were registered for insured events.

According to these government insurance claims, dog bite rates are the highest in the most populous states. In some conditions, people are bitten more often than in others:

Here are some statistics on swamp bites by breed. Of the 4.7 million dog bites, only one in five bites is severe enough to warrant medical attention.

Conversely, Great Danes are considered docile and gentle. However, when bitten, they can cause serious damage due to their size and power. The frequency of their bites and attacks is low, but the damage can be severe. So which dog is the # 1 most dangerous? 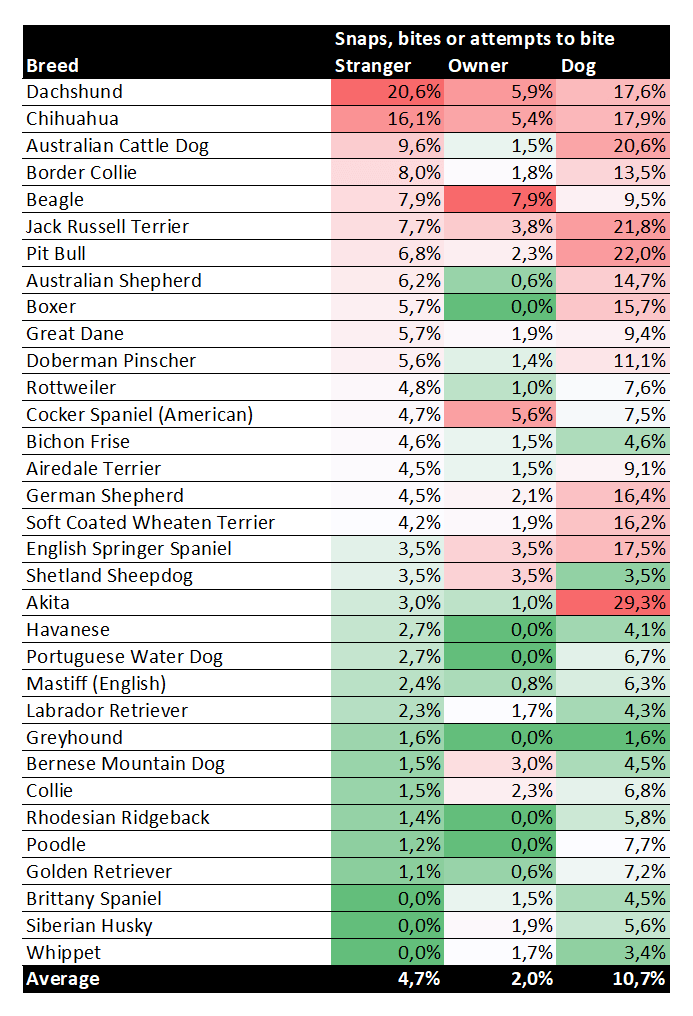 It doesn’t matter how smart your dog is. You can find aggression at any level of intelligence. Make sure you feed your dog. For example, dachshunds may require special dietary attention.

We generally classify the dogs with the highest frequency of bites and the most severe bites as the most dangerous dogs. In the United States, larger crosses and American Pit Bull Terriers are aggressive, and their bites are more common because they are much stronger and more damaging.

These are the most dangerous breeds in terms of deaths from dog attacks. Here are the dogs that bite the most:

In the United Kingdom, the Jack Russell Terrier is considered the most dangerous dog, even though it is a small breed. This is likely due to the fact that a few years ago, the Pit Bull Terrier was banned in the UK, and this ban slowed down the import of the breed. Like the American ones, German Shepherds and Rottweilers are also on the United Kingdom’s list. (5 most dangerous dog breeds in the UK)

The most dangerous breeds in India

In India, these massive dogs are most dangerous because of their size:

Dog bite force (BF) in M2 (firm points of the second molar) and canine (hollow points) versus body weight (BW) for 20 dogs of different sizes in the study. 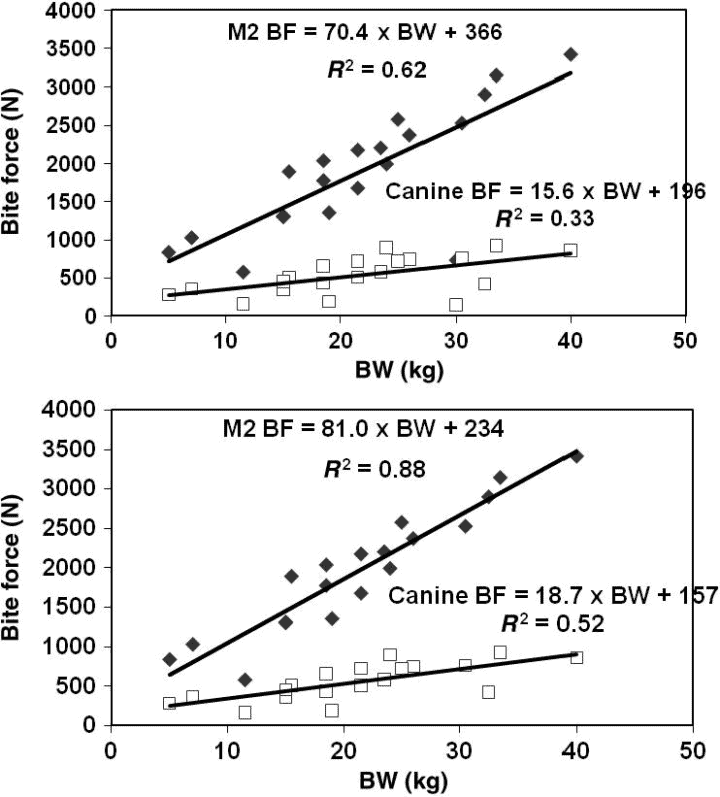 The prohibition of dangerous dogs is very common in many countries. In some countries, for example in Ukraine, there are up to 80 dog breeds on the prohibited lists. In the US, dogs are not banned nationwide, but many states have restrictions and bans on certain breeds. Unsurprisingly, the Pit Bull Terrier is at the top of most lists. Which dog is best for you and your home? Find out now.

The most forbidden dog breeds

According to world data, these are the most forbidden breeds:

Dogs bite for several reasons. They can usually be afraid, defensive, or even offended. Since many children are bitten by dogs, it is important to teach dogs to be gentle and also to teach children to respect the dog’s space. In addition, children should always be supervised when they are around dogs and should never approach an unfamiliar dog, especially if it growls or if the owner of the dog forbids approaching. Know what to do when your dog bites someone.

It’s okay to be wary of dangerous dog breeds, but many dog ​​problems stem from poor training and a poor environment in which dogs feel threatened or protected. Respect the dogs and listen to their signals.

The population of the United States is approximately 328.2 million. About 4.7 million people bite dogs each year, which means that if you are in the United States, you have a 1 in 70 chance of being bitten by a dog. However, the chance of being killed by a dog attack is only 1 in 112 400. However, this means that you are more likely to die from heart disease (1 in 6), from suffocation (1 in 2618) or as a result of a natural disaster (1 in 54 699).

Reduce your risk with these tips:

Avoid if the owner is not around or the owner of the dog tells you not to approach
Stay away if your dog appears scared, anxious, or injured.
Give your dogs space and respect
Stay away if your dog is sleeping, eating, or playing with a toy.
Stay away if the dog growls
Stay calm and avoid anxious behavior
Observe children when they are around dogs
If you are traveling to a low-income country, beware of stray dogs.
Don’t go over the fence to pet your dog
Leave the service dogs to do their job

Like humans, dogs are anxious when injured. Their anxiety can lead to a seizure. The injury should not be visible. For example, when a paw is injured. In some cases, you can give an anxious or stressed dog trazodone.

These are the best tips for keeping your dog and those around him safe:

In a developed country, dog bites are rare. Here’s what you need to remember about dog bites and attacks:

Deaths from rabies are common in areas without vaccines.
Children may be bitten more often than adults
Females are less likely to be bitten than males.
Dogs attacked 5,803 U.S. postal workers in 2019
Anxious and nervous people are more likely to be bitten.
California reports highest number of dog bite claims in 2019
Pit bulls were responsible for 33 out of 48 U.S. dog attacks in 2019
Most countries and states have banned pit bulls
Americans have a very low chance of being fatally attacked by a dog (1 in 112,400).
Dog bites can be prevented

As the world’s dog population grows, so will the number of dog bites and attacks. Although dog bites are fairly common, there are ways to prevent them and protect yourself. Even if attacked by a dog, it is highly unlikely that the attack will be fatal.

How much control do cats have on their tail?

How much are calico cats

The Beagle Breed Information and Facts

What Breed of Dog Bites The Most?